I’m pretty sure the reason Trump tweeted, “SEE YOU IN COURT!” is because he’s so used to being in court. Being sued all the time (or suing people all the time) probably makes it like his second home (you know, after Trump Tower, Mar-A-Lago, and the White House).

But I digress. For those of you who haven’t heard because you were busy refreshing this page in the fervent hope that I’d be blogging again soon (wish granted; you’re welcome), and therefore missed the news that the 9th Circuit Court of Appeals (or rather their three-person committee) upheld a stay on the travel ban-that-isn’t-a-ban-but-is-definitely-a-ban, Trump got mad at the decision and tweeted his indignation and an assertion that he’d take the court to court. So yeah.

Today, he tweeted out that the 9th Circuit “forgot” to cite or read an important article that he claims supports his ban. (Spoiler alert, it probably doesn’t.) 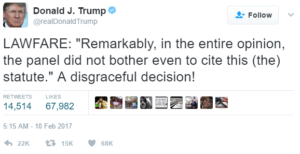 However, as that liberal rag (not really), The Hill, notes:

“The Ninth Circuit is correct to leave the [temporary restraining order] in place, in my view, for the simple reason that there is no cause to plunge the country into turmoil again while the courts address the merits of these matters over the next few weeks,” the post says.

It adds that the judicial system will eventually have to confront the clash between the president’s powers and “the incompetent malevolence with which this order was promulgated.”

I really wonder how Trump feels right about now. Well, I won’t even bother with a spoiler alert: apparently, he fucking hates it. It turns out that he CAN’T run government the same way he runs his businesses – by throwing down edicts from on high and throwing a tantrum until he gets his way, because he’s Donald Trump, God Dammit, and we’ll do it his way or the highway!

Anonymous source rumors aside, Trump appears to be confused at the concept of oversight. Being in charge of the Trump Organization meant he could be in charge and throw his weight around, making all the decisions, making the deals – but it’s difficult at best to do that with the US Government. We have checks and balances for a reason, and it’s generally considered a good thing that the president has both Congressional and Judicial oversight. We don’t elect kings in this country, a fact that apparently has been slow to dawn on Trump.

I’d like to say that the man will eventually get it, that everything will click, and suddenly we’ll have the presidential pivot that we were all promised during the campaign. I’d also like to say that I have a million dollars in my bank account and no debt, but neither of those things are true, and repeating it won’t make it happen. There is no pivot. Trump is still bitching about imaginary voter fraud and crowd sizes, and he’s obsessed with his appearance in the media. Tweeting that he would take the 9th Circuit to court is another attention-grab, whining from someone who’s used to getting his way and isn’t happy that he can’t do everything on his own timing.

Being in charge of the free world takes patience and determination. You have to be willing to work with people who may be radically opposed to you. You can’t expect to “make deals” if you’re insulting allies and belittling trade deals that took years to undertake. Trump will find himself alone, and America will be worse off. But hey, remember Hillary’s e-mails! We sure dodged a bullet with that one, right?

4 thoughts on “Trump Goes To Court”