A little over 18 years ago, I enlisted in the US Navy. After 3 years of ROTC in high school, I was ready to go into the Armed Forces and serve my country. I loved ROTC. I loved everything about it, from the PT (well, maybe – I was kinda fat and it wasn’t the best part of ROTC), to the uniforms, formation, even the paperwork. (Wait, a future CPA loved paperwork? No way!) I even won the Daughters of the American Revolution medal for outstanding military service in ROTC. I was pumped for the military. My dad and I didn’t see eye to eye on it, though, and even having my recruiter come over and talk through it with him didn’t convince him. He wanted me to go to college, get a degree, and then enlist as an officer. I wanted to work my way up the old fashioned way.

So I signed up for the Delayed Entry Program and waited for my 18th birthday. In June of 2000, I flew to Great Lakes, IL to start my career. This was it – my chance to prove my worth, to be strong, independent, part of a team. I was going to learn a practical trade (Advanced Computers and Electronics), and be part of something bigger than myself. And thanks to three years of Army ROTC, I was going to start as an E-2 (my instructor recommended E-3, but the Navy was going to offer E-2). 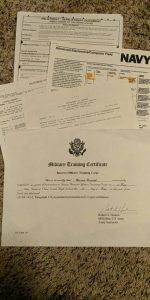 One week (two weeks? a week and a half? I don’t recall as clearly now) in, at PT-0, I was tired and dehydrated and collapsed not quite at the finish line of a mile and a half run. I was devastated. How could I have let this happen? Two weeks later, I was developing an upper respiratory infection, but I ignored it because I wanted to tough it out and push through. I quickly developed a UTI after ignoring dehydration and trying to push through pain. I got a cold pack with cough drops to get me through the cough. Two weeks after that, the day my shipmates were getting their crisp Navy Whites, I was being handed paperwork on a medical discharge, and a bottle of antibiotics that looked like horse pills to treat the high fever that resulted from a sinus infection on top of a bronchial infection on top of a UTI that was threatening to turn into a kidney infection. A nice, well-meaning psychologist at the med center had suggested I needed to go home and get better. She asked me, “Are you sad? Are you feeling kind of depressed?” I said yes and she put “Major Depressive Disorder” in my chart, sent me to her superior officer where, in tears, I said, “Of course I’m depressed! How could this happen to me?” I went back to my barracks, gathered my things in the duffel bag they’d issued, and got a ride to SEPS (the separations facility), where I was sent home on a plane a few weeks later. It was devastating.

At some point in the process, I had given up on myself. Basic Training is more than physical training, it’s a mental training as well. That first incident was a crushing blow to my self esteem. I was so ready to be on my own, to prove myself, that I started to lose faith in myself and my goal. If you want to succeed in the military, you can’t do that. You’re part of a team, and Basic is there to break you down, to build you up as an individual and as a team. Your squad mates depend on you, and each other, to make things work. If you don’t believe in yourself, you can’t believe in your team.

Every now and then (usually on Veterans Day), I pull out my enlistment paperwork and wonder what I could have been, what I could have done. The kid in that paperwork was going to go places, do things, help people. That kid had dreams and goals, but they didn’t pan out. I’ve been beating myself up about that for 18 years – I considered myself a failure, and everything I did was tainted with that voice in the back of my mind, “But you couldn’t even make it through boot camp….” I could have tried harder, I could have done more, I could have fought my discharge and tried the Army or Air Force or gone back to the Navy. But I can’t change any of that now. I came home, I went to college, and now, a bachelor’s and two master’s degrees later, I’m a CPA with a family and my own home.

I’m not sure why Veterans Day hit me so hard this year – maybe the feelings of failure had built up to the point that I couldn’t hold them back any longer, or maybe it’s listening to my friends and family talk about their own military experiences. I pulled out my paperwork and started giving myself the same negative speech I give myself every time I look at those papers. “How could you do that? Why did you squander your future like that? What happened to you?” I realized quickly that I’ve been living in the “What if…?” of the past. I was feeling sorry for myself, when I could have been feeling proud of myself for dedicating three years of my life to ROTC and trying to serve my country in the Navy. I could have been thinking about the hard work and effort I put through to make something of myself afterwards. But all these years, the only words I could muster up when I thought about it were, “You’re a failure….”

ROTC taught me a lot of things – how to work as a team, how to support my squad mates, how to lead a group (even if I sucked at marching a platoon – I once marched my platoon right into a dumpster because my commands were off…). I learned the importance of hard work and dedication. The pride of wearing a uniform. It sure as shit didn’t teach me to feel sorry for myself.

So this year, I thought about what I wanted for myself. Whether I wanted to look back in sadness and feel sorry for myself for another 18 years, or if I wanted to feel proud of myself for what I’ve done with my life thus far. I decided that I wanted to stop looking at this paperwork and living in the past, to stop thinking of my efforts as a huge failure, to quit giving myself negative talks. I also decided that it was time to say goodbye to the paperwork. I kept my military training certificate, but I shredded the rest. I decided that I can’t move on, be proud of my friends and family who have served in the past, or who are currently serving, if I was going to keep hanging on to this paperwork and pulling it out to feel sorry for myself.

I also gave myself a different talk.

I can’t tell you that it would have been better, or that you could have tried harder and it would have worked out. I know you wanted this so bad. You tried – maybe it would have been different in the Army or the Air Force, or maybe it would have just been a different kind of bad experience. But you did what you thought was right for you, and that’s important. Your worth as a person is not contingent on whether or not you made it through boot camp. Your lack of service does not make you a lesser citizen or unworthy of respect. Your success is not tainted by what you think is a catastrophic failure.

Maybe putting the past through the shredder was unnecessary, or maybe I could have tried turning those papers into a positive memory. Maybe I could have kept the papers and tried to turn this into pride, but it seemed like an empty kind of pride when I compared it to the people who made it through Basic, and through their enlistment. Regardless, I had to say goodbye to the past and my negative self-talk. I could be proud of my efforts and be proud of what I’ve done thus far, or I could continue to mope about it. I chose the former.

One thought on “On Wanting to Serve”