I haven’t written here in a while. A long while – five months to be exact – because blah blah busy season something something dark side politics whatever. The main reason I haven’t been writing here is that I’ve been vacillating between struggling in a dark place and barely mustering the ability to give fucks about anything, and . I have a good job, a loving family, a stable home life, and the thing about high-functioning anxiety and (recently diagnosed) Bipolar II-Depression is that none of that shit matters. When your brain chemistry is fucked up, things like logic and reason protect you about as well as those little paper cocktail umbrellas in a rain storm. If you’ve read any of The Bloggess’ posts, or Hyperbole and a Half, then you probably have an idea of what it’s like to wander around life while your brain tries to convince you that you’re a deadbeat and the world is better off without you.

Writing about mental health challenges is difficult. I’m going to just leave it at that. It’s difficult to describe the complex set of bizarre rules and rationalizations that your brain invents to get through everyday life, and it’s difficult because there’s a huge stigma around mental health – still. Where people wouldn’t tell someone with a broken leg that they should just be positive and their leg would be fine, that they don’t actually need a cast or crutches, people have no problem sharing shit memes like this one: 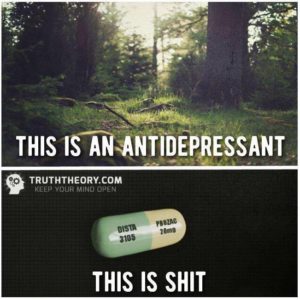 I’m hardly the first person to comment on this, but I see a stupid ass meme like this almost every day. Who wants to be told that the treatment they’re getting that finally helped them live life semi-normally is bad and that they’re a bad person for accepting that treatment? Not me, and probably not many people. I won’t even get into the bullshit Happy At All Costs culture (mostly because Barbara Ehrenreich already covered it extensively in her book, Bright-Sided). GTFOH with that crap. But it perpetuates because who wants to be miserable? There’s a kind of peer pressure to be happy all the time, and that gets perpetuated on social media (which is where I see all these stupid ass memes) where everyone is looking for Instagram-perfect bodies and kids and yoga and whatever else.

Even without the stigma and the Happiness Cults all over the place (I’m looking at you, Instagram…), dealing with what’s going on in my head is difficult. I have the kind of anxiety where I am extremely sensitive to social rules and norms. Is my hair the right style? Did I put on mascara today? Am I dressed professionally enough? Will anyone notice that I’m putting on a facade and don’t actually care about this stuff, but okay maybe I care a little bit but I’m also antisocial and I’m just trying to get by…. Even a small slip-up can cause low-level anxiety and panic that lasts for days. The other day I was so focused on getting a report finished at work that I walked into the Men’s room by mistake – I had only just barely opened the door, noticed my mistake, and turned around, but a coworker was washing his hands and laughed. Now it’s all I can think about – OH MY GOD I WALKED INTO THE MEN’S ROOM! I HAVE MADE A GRAVE ERROR! Now I must concentrate heavily on how I can avoid making the same mistake in the future, even though all I can think about is making this mistake over and over and over again and mentally punishing myself for it.

Keep in mind, this is probably the first time I’ve done this in years – probably since I was a kid – and a) it’s not like I wandered in there and actually used the Men’s room blissfully unaware; b) no one’s privacy was violated; c) no one else saw me do it, other than the coworker washing his hands. I’m told that people do this shit all the time and it’s not a huge deal. But having anxiety means never forgetting a mistake, no matter how small it was. 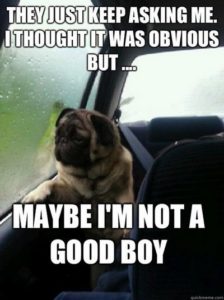 So, unsurprisingly, it’s been difficult to muster the energy to write. When I feel good, I’m trying to catch up on all the mundane crap I’ve been neglecting while my anxiety was too bad to get laundry done or go to the post office. When I feel bad, I’m just trying to get out of bed and get to work so I can make enough money to pay for my psychiatrist who prescribes the drugs that keep me upright and functional. Recently, though, I’ve been forcing myself to do things that I enjoy – we have a local writers’ group, so I’ve started going to that; I went to see Roxanne Gay’s reading at Bayou Place; I saw Welcome to Night Vale when it came to town. It reminds me that I do actually enjoy things, and it helps keep me connected to those things so that when I do feel good I can do those things more often. I tasked myself with a writing project, and I’ve vowed to actually blog more (for real this time; seriously) or at least read more blogs and write some drivel here. Finding a reason to stay connected to this world is harder sometimes than others, but it’s usually worth the trouble.